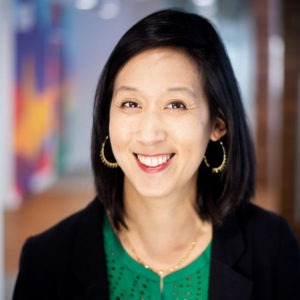 As Chief Program Director of BSCF, Ms. Wang Kong has developed a grantmaking paradigm that centers on the most critical needs of grantees. Since beginning her tenure with the foundation, she has focused on improving health outcomes for the most vulnerable populations, from survivors of domestic violence to undocumented immigrants without a health safety net. In nominating Ms. Wang Kong, Daranee Petsod, founding President of Grantmakers Concerned with Immigrants and Refugees, applauded her as an “extraordinary leader whose work strives for equity and justice, centers community needs, and empowers those most impacted.”

Ms. Wang Kong is known for her ability to lead and listen, develop creative solutions, and forge meaningful partnerships. In 2017, she worked with BSCF leadership to develop the foundation’s first-ever rapid response grantmaking program, which has since directed more than $15 million to advocacy, research, and direct service organizations. Most recently, Ms. Wang Kong utilized this rapid grantmaking model to respond to COVID-19, facilitating $6.8 million in grants to the communities most impacted by the virus. Anticipating the pandemic’s disproportionate impact on immigrants and communities of color, her grantmaking also sought to address a policy inequity: the exclusion of undocumented immigrants from receiving stimulus payments under the CARES Act. She secured a $1 million commitment for the California Immigrant Resilience Fund (CIRF), becoming the fund’s first donor, and rallied support to ensure its success. With contributions from over 70 foundations and hundreds of individual donors—and through partnerships with 61 local organizations—CIRF and the State of California provided cash assistance to more than 230,000 immigrant households.

Ms. Wang Kong has consistently demonstrated a commitment to supporting immigrant communities. She previously led the foundation’s efforts to address harmful federal immigration policies, including standing against the “public charge,” which she labeled a “threat to individual family and community resilience” in a state where half of all children have at least one immigrant parent. Ms. Wang Kong crafted a comprehensive response that expanded critical research on immigrant health; increased the responsiveness of grantmaking; and championed advocacy efforts at the corporate, community, and policy level.

Prior to joining BSCF, Ms. Wang Kong had a long career in health equity and language access, holding roles at Kaiser Permanente, the Alameda Alliance for Health, and the Agency for Health Care Research and Quality. She currently serves on the board of Grantmakers Concerned with Immigrants and Refugees. She was previously a board member of the California Healthcare Interpreting Association and was named a 2018 GIH Terrance Keenan Institute for Emerging Leaders fellow.