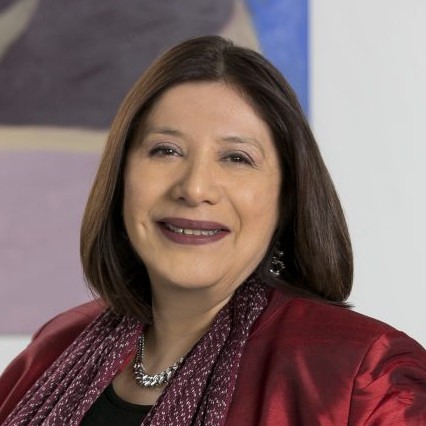 Maria del Socorro Pesqueira was appointed President of Healthy Communities Foundation in May 2017. As an award-winning visionary leader, she is a sought-after speaker addressing local, national, and hemispheric audiences on a wide variety of topics ranging from private/nonprofit partnerships, health disparities, immigration reform, women and family issues, violence prevention, and the future of philanthropy. Prior to joining the Healthy Communities Foundation, Maria served as President to Mujeres Latinas en Accion. Preceding her time at Mujeres, Maria led The National Museum of Mexican Art’s Development and Marketing team. At an early age, as the eldest daughter of Mexican immigrants, she became a translator, advocate, convener, and bridge for information and understanding. As a result, justice, equity, and collaborative effort have been her drivers for becoming a passionate servant-leader. Maria is a graduate of the Harvard University, John F. Kennedy School of Government Executive Program; St. Thomas University, Mini-MBA in Nonprofit Management; and DePaul University, B.A. Latin American Studies. She along with her husband and son reside in the HCF region, a few blocks from where she grew up.