Civic Engagement Is a Social Determinant of Health 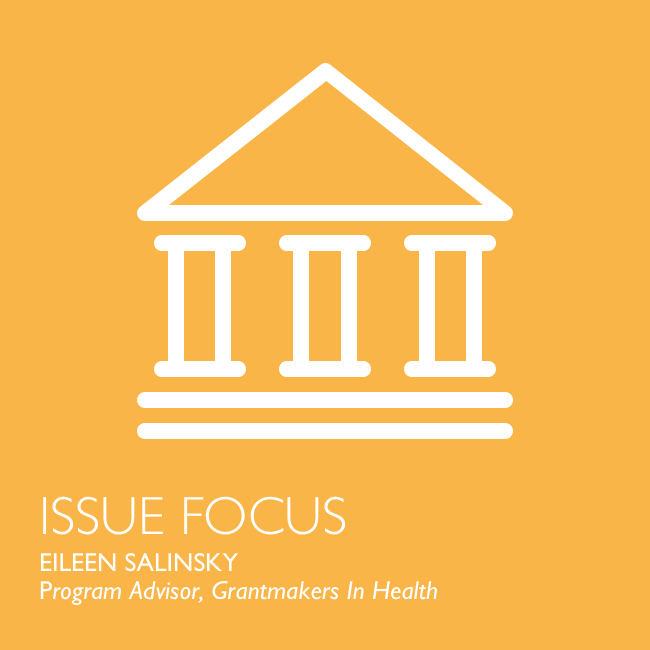 Fair and constructive policy advancements fundamentally depend on a healthy democracy. Two intersecting and interdependent systems comprise democracy in the United States:

Philanthropic interest in and support for efforts that strengthen democracy have grown in recent years. Both the Funders’ Committee for Civic Participation (FCCP) and Philanthropy for Active Civic Engagement (PACE) have seen their memberships expand beyond foundations that have traditionally identified as “democracy funders” to include issue-oriented funders that recognize that an open, fair, and inclusive democracy is foundational to their strategic goals. Grantmakers In Health (GIH) has similarly observed growing attention to civic engagement within the field of health philanthropy.

In selecting organizations to interview, GIH was intentional in choosing funders with diverse characteristics in terms of asset size, geographic focus (i.e., foundations operating at national, state, and local levels), geographic location, and tax status (i.e., private foundations and public charities). While most respondent foundations have organizational missions focused on health, some have missions that are more broadly framed.

This article summarizes the key themes that emerged from these interviews exploring why and how health funders are investing in civic engagement. The examples provided are illustrative and do not fully describe the work supported by any of the foundations referenced or their grantees.

What is civic engagement?

PACE defines civic engagement as “helping people be active participants in building and strengthening their communities, whether defined as a place or a shared identity or interest.” This inclusive definition reflects a spectrum of ways people can participate in their communities—including both public- and private-sector interactions—such as voting, advocating for policy change, joining social and religious groups, volunteering, and donating to charities. Similarly, FCCP defines civic engagement as “the collection of nonpartisan ideas, activities, and field building interventions that serve to promote reform in the areas of social attitudes and behaviors, public policy, and politics.” This definition more explicitly recognizes that policy-oriented reforms are necessary to strengthen and protect the civic infrastructure.

Relatively few of the foundations represented in this scan of the field have adopted a formal definition of civic engagement and individual perspectives regarding this definition varied. Most respondents held a broad conceptualization of civic engagement similar to the PACE and FCCP definitions. However, respondents typically reported that the civic engagement work of their foundations emphasizes increasing participation and power in democratic processes and prioritizes communities of color, low-income populations, and other groups that have been historically marginalized and disenfranchised. For some respondents the term civic engagement was closely associated with encouraging electoral participation, such as through voter registration or engagement efforts. Others employed a broader frame to include efforts directed at increasing communications with and accountability for elected officials, improving interactions with government agencies, supporting grassroots mobilization, promoting community organizing, and advancing structural reforms to protect and modernize democratic processes.

Several of the foundations included in this scan have explicitly identified concepts related to civic engagement in their strategic plans, although they may utilize different terminology to describe these goals. Strategic priorities often refer to building community power, lifting community voices, and activating community members. For example:

More work is needed to develop a clearer consensus in the field on definitions related to civic engagement and community power building and how these concepts intersect with and support each other.

Health funders are increasingly beginning to recognize that investments in civic engagement are not only helpful, but necessary, to achieve health-related objectives. Although many of the foundations participating in this scan have supported civic engagement for several years, both the strategic importance of this work and the level of resources invested in related grants have increased. Most of the funders participating in this scan devote a significant portion of their grantmaking to civic engagement, typically ranging between 10 to 30 percent of total funding. Respondents generally expect levels of support to remain stable or increase in the future.

A commitment to health equity was cited by numerous respondents as a primary driver in their organization’s decision to increase investments in and attention to civic engagement. Community power building is essential to dismantling the structural racism that disenfranchises and marginalizes people of color.  A few respondents noted that while early investments in civic engagement were primarily viewed as a means to advance health promoting policies, such as Medicaid expansion, this thinking has evolved to recognize civic engagement as an inherently valuable goal. The intrinsic value of civic engagement lies in the collective agency people gain by exerting power to influence the conditions that shape their lives.

As described by FCCP, funders can pursue a wide range of strategies to promote civic engagement and strengthen the civic infrastructure. Civic engagement activities most commonly cited by health funders participating in this scan include community organizing, leadership development, voter engagement, census support, and redistricting advocacy. These activities are supported through program grants, as well as general operating support for power building organizations and technical assistance.

In the Power Moves toolkit, the National Center for Responsive Philanthropy defines community organizing as:

A process of building relationships, leadership and power, typically among marginalized communities, and bringing that power and collective voice to bear on the issues that affect those communities by engaging with relevant decision-makers. The issues raised, solutions identified, and strategies developed to achieve those solutions all are defined and acted on by the leaders themselves, often with help from professional organizers.

This definition centers affected constituencies as the agents of change, rather than paid advocates or lobbyists who represent community interests.

Organizing and base building are pivotal to community power building efforts. Groups that facilitate organizing and base building frequently partner with other organizations in the broader power building ecosystem, such as organizations that specialize in research, policy advocacy, and legal support; focus on communications, messaging, and polling; or employ arts, culture shifting, and narrative change strategies. These activities are most effective when conducted in service to the priorities and change strategies that emerge through community organizing.

Voting is perhaps the primary and most visible expression of active participation in democracy. Voters participate in elections to choose representatives for government at federal, state, and local levels and to decide ballot initiatives in some states and localities. Although voter participation has trended upward in recent years, approximately one-third of eligible voters did not vote in the 2020 presidential election. Structural barriers, such as onerous voter registration requirements, inflexible voting hours, long lines in polling locations, and cynicism about government depress voter turnout. Because communities of color, young people, and low-income Americans are disproportionately burdened by structural barriers and frequently marginalized in political decisionmaking, voter participation rates are often lower for these populations.

Foundations can support a wide range of nonpartisan election-related activities to educate voters and increase voter engagement and participation. While federal law places some restrictions on private foundations seeking to earmark funds for voter registration, philanthropy can play an important role in encouraging people to vote. Integrated voter engagement (IVE) is one of the most effective ways to increase voter turnout. By integrating voter engagement with ongoing issue advocacy and community organizing, these efforts build long-term engagement in democratic processes beyond sporadic participation in isolated election cycles.

The decennial census has profound implications for the health and vitality of communities across the country. Results influence allocation of public sector resources in programs like Medicaid and the Supplemental Nutrition Assistance Program (SNAP); dictate reapportionment of political representation at the federal, state, and local levels; and inform a host of private sector planning and investment decisions. Certain “hard to count” populations, such as young children, communities of color, low-income households, and people living in rural communities, are particularly at risk for being undercounted. These populations can be hard to count for a wide variety of reasons, including frequent changes in address, reluctance to participate due to distrust of government and concerns about data confidentiality, as well as barriers related to language, literacy, and lack of internet access.

A growing number of health funders have recognized the importance of a fair and accurate census for the advancement of population health goals, supported a broad range of activities to “get out the count” in the 2020 census, and are already planning for the 2030 census.

After each decennial census, new U.S. congressional and state legislative district lines are drawn in a process known as redistricting. This redistricting process is a critical opportunity to ensure equitable political representation and address systemic inequities. Gerrymandering (i.e., when boundaries are drawn with the intention of influencing who will get elected) erodes democracy and deliberately dilutes the power of communities of color that are often targeted in the creation of unfair district maps. Philanthropic resources help to promote community-centered redistricting by supporting public education and robust community input, providing technical resources related to map drawing and analyses, advancing advocacy for fair and transparent processes, and funding litigation to challenge unfair district maps.

Recognizing the value of flexible funding, several of the foundations participating in this scan support civic engagement efforts through general operating support grants.

In addition to providing project and general operating support grants, funders can also strengthen the civic engagement infrastructure by offering technical assistance to civic engagement organizations. These grassroots organizations are often relatively small in terms of both staff size and operating budgets and may lack access to costly data resources and communications technologies that could facilitate their outreach efforts. For example, commercial voter files are databases that provide publicly available information on individuals’ voter registration and election turnout, as well as information from outside data sources (e.g., consumer data vendors, credit bureaus, and political organizations) that can be used for predictive modeling.

What are the important lessons learned for funders considering this work?

Interview participants offered reflections and advice to other funders who might be considering support for civic engagement based on their own experiences.

Key questions for health funders exploring whether to initiate or expand funding for civic engagement include: What is the civic health of the communities you serve? Are community members equitably engaged in democratic processes and civic life? How might increased levels of civic engagement influence the distribution of public sector resources, population health outcomes, and health inequities? Is it possible to imagine transformative changes in community health absent a meaningful shift in community power and civic participation?