Now More than Ever We Need Philanthropy to Prioritize Health Equity 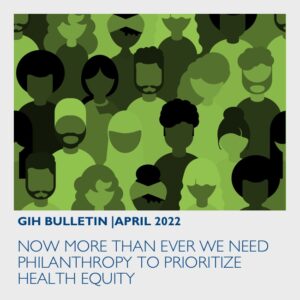 April marks National Minority Health Month. It is a time for us to educate ourselves on the health challenges facing communities of color and other vulnerable populations, and to reflect on the progress we have made towards advancing health equity and what more we must do to ensure everyone has a fair and just opportunity to be as healthy as possible. The origins of this observance date back more than 100 years, but it was officially recognized by Congress 20 years ago.

Two years ago, our collective was awakened to long-standing systemic inequities experienced by communities of color in every facet of life, including health. More people became familiar with the social determinants of health and understood their impact, and more people began to talk about intersectionality and structural racism. In response to this awareness, organizations from philanthropy to government issued statements denouncing racism; established or expanded programs focused on eliminating disparities; supported organizations led by people of color and supporting communities of color; established diversity, equity, and inclusion positions; sought to diversify their boards; sought to tackle structural racism; and more. A year later, we saw some commitments were not quite realized. Some expressed frustration that more progress had not been achieved, while others pointed out how difficult it would be to reverse decades of policy, practice, and culture.

Today, we find ourselves in a situation where many organizations are continuing to advance health equity, and national leadership continues to promote policies to reduce inequities, but man state and local leaders are resisting in louder and more disturbing ways. Banning the teaching of our country’s history in all its complexities; attacking critical race theory; removing books from libraries and school curricula that talk about race, sexual orientation; and gender identity; criminalizing parents and others seeking to support members of the LGBTQ community; attempting to disenfranchise voters; and limiting access to health care for women run counter to much we claim to value as a country and are having a disproportionately negative effect on communities of color and other vulnerable populations. Moreover, sweeping things under the rug or refusing to discuss them does not mean they do not exist, nor does it make them go away. These efforts will stifle progress towards advancing health equity and have long-lasting negative effects.

Two years ago, I wrote Enough is Enough: It is Time to Get Serious about Eliminating Racial Disparities. In it, I noted that change is hard, but it is possible if we work together, and that achieving health equity is a marathon, not a sprint. We are at another important inflection point on our health equity journey. As we did when the pandemic began, we need to recommit to making health equity a priority, strengthen the role of leadership, and commit to tackling the tough issues.

Health funders serve many critical roles for the communities they support. They help give visibility and support to some of the most vulnerable people, serve as a bridge between community and policymakers, bring together myriad stakeholders working to address important issues, and serve as leaders through their voice and the programs they choose to support. Now more than ever, we need health funders to leverage each of these roles to ensure that we do not lose the progress of the past two years, and that we do not revert to a time when racism, sexism, homophobia, and xenophobia were acceptable practice. As Barbara Mikulski said, “Each of us can make a difference. Together we make change.”