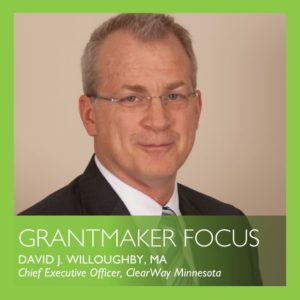 ClearWay Minnesota was created in 1998 as a result of Minnesota’s settlement with the tobacco companies. Minnesota received $6.1 billion and it is funded with 3 percent ($202 million) of the total settlement. It is a private, independent nonprofit corporation with a limited lifetime, ending in 2021.

ClearWay Minnesota’s mission is to enhance life in Minnesota by reducing tobacco use and exposure to secondhand smoke through research, action, and collaboration. Since 1998, ClearWay Minnesota’s work has changed Minnesota in ways that are having lasting, tangible impacts on the lives and health of the people of this state. Its work encompasses public policy, research, cessation, community development, and marketing and communications activities. Over the past two decades it has helped bring about outcomes including adult and youth smoking declines, billions of dollars in medical costs and worker productivity saved, as well as deaths, cancers, and hospitalizations prevented.

ClearWay Minnesota has given grants to Minnesota researchers studying tobacco use and to advocates working to create and implement tobacco prevention strategies at the state, local, and community levels. Notable programs include QUITPLAN Services, a free quit-tobacco program that encompassed counseling, medications, and other proven cessation tools; the Minnesota Adult Tobacco Survey, the most comprehensive research study on Minnesota tobacco behaviors and attitudes; and the Leadership and Advocacy Institute to Advance Minnesota’s Parity for Priority Populations, which trained diverse community members to lead commercial tobacco prevention activities from within their own communities.

The organization led a coalition of over 60 organizations with a shared objective of preventing youth tobacco use (Minnesotans for a Smoke-Free Generation). The advocacy work of this coalition has resulted in major public policies passed, including a clean indoor air law and tobacco tax increases at the state level as well as local Tobacco 21 policies and flavored-tobacco restrictions. Its collaborations with Minnesota’s American Indian tribes have supported their efforts to distinguish between traditional tobacco use and commercial tobacco abuse, and resulted in some of the first commercial tobacco-free policies on Native lands in the state. Finally, its award-winning mass-media campaigns raise awareness of tobacco’s harms and direct Minnesotans looking to quit to cessation help.

Community Engagement and QUITPLAN Ambassador Grants—to increase use of QUITPLAN Services by communities disproportionately impacted by the harms of commercial tobacco by increasing knowledge of and trust in the services. Fifteen organizations were funded through these initiatives. ($200,000)

Tribal Tobacco Use Project II (TTUP-II)—ClearWay Minnesota funded the first Tribal Tobacco Use Project (TTUP) in 2009 to generate statewide and tribal-specific data on commercial and traditional tobacco-related knowledge, attitudes, and beliefs among American Indian adults. This follow-up study (TTUP-II) will collect valid data on tobacco-related knowledge, attitudes and beliefs, as well as to demonstrate changes in these estimates since the first TTUP. Results will serve as a guide for tribal and statewide stakeholders for reducing the harms of commercial tobacco use statewide and within individual Tribal Nations. ($800,000 for three years)

Orientation of Our Organization

“For more than two decades, ClearWay Minnesota has led the fight against Minnesota’s top preventable cause of death and disease: commercial tobacco use. Our scope is among the broadest of any tobacco control organization in the country. The work we led has prevented thousands of deaths and tens of thousands of hospitalizations, and saved billions in worker productivity and health care costs.

We helped 195,000 Minnesotans in their efforts to quit smoking and using other forms of tobacco, gave tens of millions of dollars to researchers, and worked with the Minnesota communities hit hardest by commercial tobacco use. With partners, we helped pass smoke-free air, tobacco taxes, cessation funding and innovative local policies, and we raised awareness of the need for individuals to quit smoking and available cessation help.

As a limited-lifetime organization, we will close our doors next year, but the continuing results of our efforts will ensure ClearWay Minnesota has a lasting legacy.”