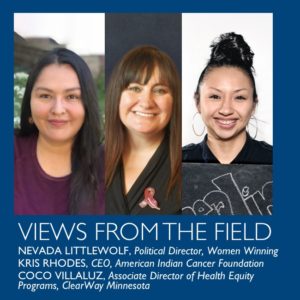 American Indians in Minnesota have one of the highest recorded cigarette smoking rates of any subgroup. Fifty-nine percent of American Indian adults in the state smoke, compared to 16 percent of the general population. Smoking cessation is a complicated issue in Indian Country, because of the sacred healing uses of tobacco. In order to respectfully and effectively address the harmful epidemic of cigarette smoking among American Indian adults, ClearWay Minnesota listened carefully to Native communities and adopted a model that focused on the dangers of commercial tobacco use while honoring the traditional healing traditions of tobacco. This model is referred to as the “two tobacco ways” framework and serves as an instructive illustration of how context is important in addressing health disparities and heath equity across communities.

Since its inception, all of ClearWay Minnesota’s initiatives have included the perspectives of communities; Minnesota Tribal Nations; and ClearWay Minnesota’s American Indian board members, grantees, and staff members. These partnerships provided guidance, insights, and direction on engaging with Tribal Nations and community partners. This input was enormously valuable as ClearWay began to implement the two tobacco ways framework, which distinguishes commercial tobacco from the sacred and traditional use of tobacco and was created by the Blackfeet Nation, which was the first Tribal Nation to pass a comprehensive commercial tobacco free ordinance in the United States.

Over the last twenty years, ClearWay has supported multiple research, policy, media and cessation projects that used the two tobacco ways model as a guide. These projects have all contributed to a comprehensive approach for reducing tobacco prevalence among American Indians in Minnesota.

ClearWay Minnesota’s largest research investment has been the Tribal Tobacco Use Project (TTUP), a native-led prevalence study of commercial and traditional tobacco use among American Indian adults. TTUP is the first reliable statewide American Indian adult tobacco prevalence study in the United States. The first TTUP took place 2008-2013. Findings of the 2013 report were shared with tribal councils, health directors, stakeholders, and community members. Multimillion-dollar investments were made by tribes and public health organizations to address the staggering 59 percent smoking rate for Minnesota American Indians. A variety of tobacco plans were developed by tribal tobacco coordinators that were rooted in culture and community-led. Currently, the American Indian Cancer Foundation is implementing the second round of TTUP. Data collection began in 2019 and is expected to be complete in 2021.

ClearWay Minnesota’s primary policy project was the Tribal Tobacco Education and Policy (TTEP) initiative, which was funded from 2008-2018. The purpose of this initiative was to provide resources and assistance to six Tribal Nations to address commercial tobacco through policy and advocacy approaches.  The goals of TTEP were to educate American Indians about the health dangers of commercial tobacco use and secondhand smoke and to advance commercial tobacco-free policies on tribal lands. During these ten years, over fifty policies were passed within the participating Tribal Nations. These policies included the first smoke-free foster care policy in Indian Country and the first e-cigarette policies within casinos and businesses.

ClearWay Minnesota also funded a statewide media campaign called Keep Tobacco Sacred. This advertising campaign provided education on the differences between traditional and commercial tobacco, and included billboards, radio ads, and art projects such as murals and art exhibitions. In addition to this campaign, ClearWay Minnesota collaborated with Twin Cities PBS on Reclaiming Sacred Tobacco, a 30-minute documentary on the tobacco practices of the Anishinaabe and Dakota communities in Minnesota, which won a 2017 Midwest Emmy.

During this time, the ClearWay Minnesota Cessation Department created and implemented an American Indian specific Commercial Tobacco Quitline. They collaborated with American Indian Cancer Foundation and subject matter experts and a Quitline vendor to provide services specific to American Indians who had a historic understanding of the two tobacco ways in helping people quit using commercial tobacco.

The Secrets of Our Success

Throughout all our work, these key points continue to resonate:

Our successful collaboration with Minnesota’s Tribal Nations and urban American Indian programs demonstrates the importance of listening to and trusting community partners and applying a strengths-based approach. Throughout this work, we have seen the benefit of authentic community partnerships, advocacy, and valuing cultural wisdom when promoting health.