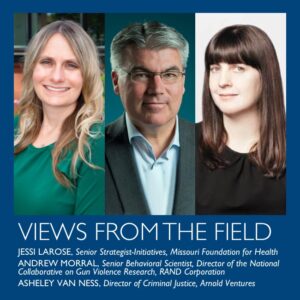 On any given day in the United States, close to 100 people are killed by firearms. For each death, two more people are injured. Whether it takes the form of a school shooting, domestic assault, or suicide, firearm violence inevitably leads to calls for action from voices across the political spectrum. However, beyond the headlines, there is surprisingly little recent research about firearm violence in America—and even less about what can be done to prevent this bloodshed. The dearth of rigorous research and data, which stems from a historic lack of federal funding, means policymakers and individuals have little reliable information on which to base their decisions about gun laws and regulations. In this data vacuum, philanthropies are stepping forward to start filling in the research gaps.

Because the federal government had invested little in firearm violence prevention research over nearly a quarter of a century, Arnold Ventures launched the National Collaborative on Gun Violence Research (NCGVR) in 2018 with a five-year, $20 million gift. The RAND Corporation is administering the effort to solicit rigorous, independent research grant proposals focused on firearm violence prevention. RAND was chosen because of the organization’s deep technical knowledge of gun-policy science, its reputation for objectivity and independence, and its ongoing Gun Policy in America initiative.

This effort was undertaken in a manner independent from any preconceived positions. Rather, the goal was simply to learn more about the causes of and solutions to firearm-related violence in the U.S. The National Collaborative is an important step toward building the evidence base our nation currently lacks.

After the establishment of NCGVR, the larger philanthropic community began to express interest in supporting research into firearm violence. For example, with the release of the 2020 NCGVR request for proposals, Missouri Foundation for Health (MFH) approached NCGVR to discuss a partnership, resulting in a $1.5 million investment to create a carve-out within the effort to support Missouri-specific research. This partnership built on the foundation’s work that began in 2017 to focus on firearm violence as an area with the potential for transformative change, and to position Missouri as a focal point for a new era of rigorous research to better respond to this crisis. By working with NCGVR, the foundation was able to leverage its already existing expertise and infrastructure and provide support for research expressly focused on Missouri.

As a regional funder with a defined service area, it was important for MFH to coordinate with the National Collaborative on establishing a clear definition of Missouri-relevant research (i.e., projects that investigate programs, policies, or interventions used in or developed for Missouri, or that study the experiences of Missourians) in order to help guide NCGVR’s Research Advisory Committee in its selection process. MFH staff worked closely with NCGVR on developing this definition and overarching parameters but was not involved in proposal review or selection to preserve the integrity of the stringent review process.

To date, NCGVR has made 44 research grant awards, totaling more than $21 million in funding. These include 13 dissertation and post-doc awards, as well as awards for large new studies on domestic gun violence, officer-involved shootings, harms to firearm owners associated with gun laws, gun suicides, gun policy analysis, and urban gun violence. Missouri-relevant research accounted for four awards. These projects include basic descriptive studies designed to better understand the causes and circumstances of violence, randomized controlled trials of violence prevention interventions, and studies of the effects of government policies on firearm acquisition and use.

NCGVR adopted several practices to increase transparency and accountability, and ensure that its research was independent, objective, and ideologically neutral. Research Advisory Committee members were selected to reflect a diversity in background, expertise, race and gender, political affiliations, and geography. The committee works by conducting independent scientific-merit reviews of all proposals and provides reviewer feedback to each applicant. Grantees are required to publicly release the data collected, the statistical programs used to clean and analyze the data, and the reports produced. These transparency and objectivity requirements have been influential in attracting the support of other funders, including MFH, Wells Fargo Bank, the Conrad Hilton Foundation, and the Harry Frank Guggenheim Foundation. A detailed governance plan describing how its Research Advisory Committee operates and selects projects is available on the NCGVR website.

NCGVR also works to maintain independence and objectivity by requiring that grant funds and awards be administered through a professionally managed donor-advised fund. This system creates distance between RAND’s research and the funding sources. However, some prospective funders were unable to take part due to their own awarding policies conflicting with this arrangement. In particular, some philanthropies needed their own grant agreement with the grantee, and the donor-advised fund could not serve in that role.

While these strict, self-imposed rules can create some difficulties, they have paid off by allowing NCGVR to position itself as a respected, nonpartisan effort and has garnered attention from the media and Congress as a result. The House Appropriations Committee invited the director of NCGVR to provide testimony at a subcommittee hearing on the need to fund federal research into firearm violence prevention. Following this hearing, Congress and President Donald Trump approved the first gun violence research appropriation in 25 years. It is becoming clear that investments made by Arnold Ventures, Missouri Foundation for Health, and the other funders not only set an example for the private sector, but also have helped the federal government rethink how it funds the science around firearm violence.

Research can be instrumental in changing behavior and suggesting improved policies in response to public health crises like the gun violence epidemic. However, philanthropy can never come close to providing the scope of funding that is possible from the federal government.

Over the last two years, Congress has appropriated $25 million in research for the Centers for Disease Control and the National Institutes of Health to study firearm violence. Nevertheless, there is still an enormous need for information and evidence that can support the development of fair and effective gun policies.

Earlier this year, the Joyce Foundation and Arnold Ventures engaged Health Management Associates to conduct an independent study of what it would cost to fill the gap in knowledge and data collection around gun policy. According to this report, the federal government would need to spend about $128 million per year over five years to fund the comprehensive research agenda and data infrastructure recommended by expert panels.

Large disagreements remain on whether the future would be safer with more or fewer guns, underscoring the pressing need for careful research to inform firearm policies. Philanthropies can play a vital role in ensuring this research occurs. Whether by directly funding new research or calling on Congress to increase funding, philanthropic institutions can help build the evidence that leads to more effective gun policies and invest in initiatives for improved firearm data at the local, state, and federal levels.