Freedom to Thrive: How Health Funders Can Support Transgender Communities 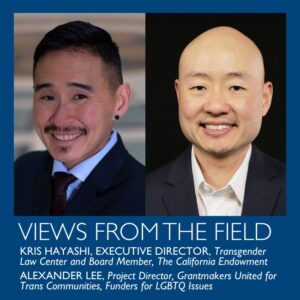 This spring The California Endowment (TCE) named Kris Hayashi (he/him/his), Executive Director of the Transgender Law Center (TLC), as the first ‘out’ transgender person to serve on its Board of Directors. Kris’ appointment comes at a time when transgender communities—particularly transgender women of color, people with disabilities, and those living with HIV—face enormous barriers to survival. Despite well-documented disparities in health and well-being, according to Funders for LGBTQ Issues, for every $100 awarded by U.S. foundations in 2018, only 4 cents directly supported transgender communities. Furthermore, their data shows that grantmakers gave only $6.2 million to specifically support the health and well-being of transgender communities across the country in 2018—compared to the $12.6 billion documented by Candid granted nationally that year for health-related work.

Grantmakers In Health (GIH) Program Director Ann McMillan sat down with Kris and Alexander Lee (he/him/his), Project Director of the Grantmakers United for Trans Communities (GUTC) initiative of Funders for LGBTQ Issues, to learn more about how health funders can support transgender communities.

GIH: What are some of the key strategies that transgender activists and their funders are pursuing to fight for the transgender community’s health and well-being?

KH: The lack of attention and services for transgender communities, especially apparent during the COVID-19 pandemic, has forced trans communities to largely rely on ourselves to provide food, cash grants, and housing; to break social isolation; to fight for access to personal protection equipment, vaccines, and testing; and to advocate for our rights.

Across the country, we’re doing all we can to keep our communities alive, safe, and thriving, through projects like the UTOPIA in Seattle, Brave Space Alliance in Chicago, For the Gworls and the Okra Project in New York City, the TGI Justice Project and El/La in San Francisco, and the Organización Latina de Trans en Texas and the Black Trans Advocacy Coalition in Texas. Black and brown trans women are doing this life-saving work with limited help from grantmakers. Yet they are effective because local trans leaders are best positioned to provide direct aid, as trans communities too often face discrimination and rejection when accessing services from institutional health care providers.

AL: Funders for LGBTQ Issues works to increase the scale and impact of philanthropic resources aimed at enhancing the well-being of lesbian, gay, bisexual, transgender and queer communities, promoting equity, and advancing racial, economic and gender justice. We launched the Grantmakers United for Trans Communities (GUTC) initiative in late 2017 to provide technical assistance and support to funders to help them deepen their support of trans communities across multiple funding areas.

Our communities, working with so little, have responded in astounding ways to fill the gaps left by our social safety nets, but improving health outcomes isn’t just about responding to COVID. Trans leaders are also creating housing for trans people. Health funders know that housing instability—caused by discrimination from shelters and landlords, gentrification, and the growing wage gap—leads to poorer health outcomes.

Nationally, trans-led groups like Casa Ruby in Washington DC, GLITS in New York City, My Sistah’s House in Memphis, the Transgender Housing Coalition in Atlanta, the House of Tulip in New Orleans, and Love Me Unlimited 4 Life in Jackson are working to create more permanent housing solutions as part of their multi-sector strategies to improve the health and well-being of trans communities. I’d encourage health funders to support efforts like these.

GIH: Have conditions for the transgender community improved under current state and federal governments?

KH: So far this year, legislators have proposed nearly 200 bills in 35 states attacking trans people, most of them targeting trans youth, many specifically seeking to deny us health care. Trans people have always been under attack, and we continue to be a target, especially at the state level.

AL: Despite opposition, trans-led organizations continue to organize for health justice. In an impressive win earlier this year, the TransLatin@ Coalition in California led a statewide coalition to successfully urge the state to appropriate $13 million for a Transgender Wellness and Equity Fund—the first such fund in U.S. history.

This exciting work could benefit from additional funder support, and we launched the GUTC Pledge in 2019 to create momentum and tools for funders to engage. The pledge guides funders to deepen their work with trans communities in concrete, measurable ways—in their funding, in their hiring and recruitment of trans staff and board members, and in using their organizational voice to advocate in solidarity with transgender communities.

GIH: What are your hopes for health funders to better support transgender communities?

KH: The California Endowment was an early adopter of the GUTC Pledge, which I’d like to see more health funders join. This pledge gives funders concrete benchmarks to help them develop their trans funding programs, and to receive resources and support from peer funders and Funders for LGBTQ Issues along the way.

I would also like to see more funding for trans-led organizations, particularly Black, Indigenous, and people of color (BIPOC)-led groups, and to fund deeply—in ways that give nonprofit organizations maximum flexibility to use all the tools at our disposal. Continuing the work of countless trans leaders, earlier this year TLC led a national coalition to launch the Trans Agenda for Liberation, which offers a strategic blueprint for capacity-building that funders in many sectors can support. Strengthening the capacity of trans leaders to build the trans movement is a core strategy that works.

AL: Larger grantmakers, including many larger health funders, have often cited logistical difficulty in funding smaller groups as a barrier to providing more support to trans-led groups. However, intermediaries with deep ties to the trans community, like Borealis Philanthropy’s Fund for Trans Generations, the Black Trans Fund, the Campaign for Southern Equality, Trans United, Southern Vision Alliance’s Queer Mobilization Fund, the Contigo Fund, the Southern Power Fund, and the Third Wave Fund, have proven they can effectively provide direct funding from large foundations to smaller trans-led groups. Furthermore, the Trans Justice Funding Project has supported and mapped many trans-led organizations across the country, showcasing the wide diversity of funding opportunities that exist. The time is more than right for larger funders, particularly in the health sector, to partner with the trans community to help power-up a major culture-shifting civil rights movement in its prime.