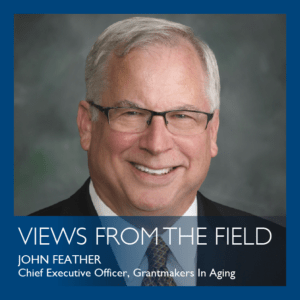 Unless you fund an AIDS-serving organization or have a personal connection, this may surprise you, but HIV/AIDS has quietly undergone a metamorphosis, and it is time for health funders to take a fresh look.

The face of the disease has changed. It still affects many gay and bisexual men, but women make up 25 percent of those living with HIV in the U.S. and more than half of them are women of color, often infected through heterosexual sex. Racial diversity is up and new cases are disproportionately high among African American and Latinx people. Transgender people and people who inject drugs comprise small but important subgroups. The death rate (70 percent at the peak in 1995) has fallen dramatically and the virus that once ravaged New York and San Francisco now sees half of all new diagnoses in the South (CDC 2020). Perhaps the biggest surprise is longevity. HIV has gone gray, unexpectedly, and half of the 1.1 million people living with HIV in the U.S. today are 50 or older. By 2030, that could reach 70 percent (CDC 2017).

This is a success story built on medical and pharmaceutical advances, advocacy, and resilience. Now people who thought they would never reach old age must think again, and so must we.

A Moving Target, and Still Dangerous

A few caveats: HIV is no longer a death sentence but remains an incurable complex condition. Stigma and health disparities keep people out of care, endangering their lives and perpetuating the epidemic. It is lethally intertwined with the opioid crisis. Older people (17 percent of new infections) are under-diagnosed (CDC 2019). This is all quite new, and the first generation of epidemic survivors is deciphering it—alongside health care and service providers and caregivers—in real time.

People living with HIV often age into “no man’s land” as their care needs evolve. They may receive good HIV care from a clinic or specialist, but these providers often don’t know how to manage their many non-HIV co-morbidities: cardiovascular disease; lung disease; liver disease; neurocognitive disorders, including dementia and depression; and cancer (people with HIV who are in care are more likely to die of cancer than anything else).

While it may seem young to seek treatment from a geriatrician at age 50+, many people aging with HIV experience classic geriatric syndromes (i.e., falls, urinary incontinence, functional impairment, frailty, sensory impairment, depression, and cognitive impairment) (Greene 2015). But seeking treatment in a non-HIV setting can be traumatizing, and fear of stigma or being “outed” scares some people away. The HIV care leader Golden Compass at UC San Francisco has been successful in co-locating other services in its trusted setting. A few geriatricians, such as Eugenia Siegler, founder of Aging with HIV at Weill Cornell Medicine, have experimented with bringing geriatric consults and social work to HIV clinics, with support from the Fan Fox and Leslie R. Samuels Foundation.

Both sides need to learn from each other. An important resource: The HIV and Aging Consensus Project: Recommended Treatment Strategies for Clinicians Managing Older Patients with HIV, supported by funders including Archstone Foundation (McCormick et al. 2017). Continuing medical education from the American Academy of HIV Medicine is another route to interdisciplinary awareness.

People living with HIV have higher rates of substance use disorders, depression, and PTSD. Neurocognitive disorders (including dementia) are also common. It is not yet known if the cause is the disease, the medications, or a combination of both, and research is just getting started (Kamkwalala and Newhouse 2017).

Family caregiving may be unavailable because of strained family relationships or partners and friends lost to the virus and LGBTQ people (still 55 percent of those living with HIV) are less likely to be married or have children to provide care. Retirement savings and long-term care insurance are scarce among long-term survivors. “Families of choice” are an important alternative, but few programs exist to support HIV caregivers (NASEM 2016).

All this increases the likelihood of institutional care but concerns about being re-traumatized by stigma or “re-closeted” (for people used to living openly as LGBTQ) are common. Cultural competency training for the long-term care workforce can help. SAGECare contains an HIV education module for anyone who works with older people.

People living with HIV represent less than 1 percent of the Medicare population but that number will grow. Medicare covers one out of four people living with HIV at a cost (up to $45,000 per year) four times higher than average. Most are dually eligible for Medicaid and some receive extra help through HRSA’s Ryan White HIV/AIDS Program (Kaiser Family Foundation 2016).

People aging with HIV are some of the most vulnerable, stigmatized, and systematically excluded people in our society. The aging and HIV care networks are skilled and committed, but coordination is limited at best. Supporting them in working and learning together is an essential next step. Whether you work on social determinants of health, clinical research, mental health, social services, or social justice issues, the challenges facing these survivors of an all-too-recent epidemic should resonate with all of us.

Centers for Disease Control and Prevention (CDC). “HIV in the United States and Dependent Areas.” April 2, 2020.