How Foundations Can be Engaged This Election Year 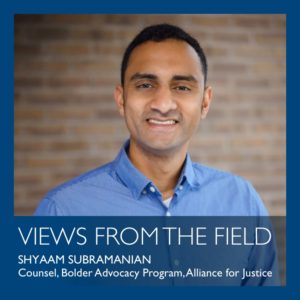 Election season presents tremendous opportunities for philanthropic organizations to educate voters and candidates on the issues core to their charitable missions. Through strategies such as civic engagement and public policy advocacy, nonprofit organizations can expand the reach and impact of their activities. Alliance for Justice’s (AFJ) Philanthropy Advocacy Playbook helps foundations and their grantee partners understand how advocacy leverages their grant dollars, strengthens their missions, and helps them shape positive policy change to benefit the communities they serve.

During an election year, private and public foundations may continue their advocacy, but must avoid supporting, or opposing candidates for public office, because they are tax-exempt under Section 501(c)(3) of the Internal Revenue Code.

To determine whether a particular election-related activity is nonpartisan, the IRS looks at all of the facts and circumstances surrounding the activity. Fortunately, there are a wealth of examples foundations can look to for guidance on what to do and what not to do when it comes to advocacy and civic engagement during an election year. Many of the examples below are based on real-life events, and some are from AFJ’s comprehensive guide The Rules of the Game. AFJ provides additional resources on these topics, including information related to state law and technical assistance to help foundations address their specific circumstances and legal questions. (These guidelines are general in nature and do not represent legal advice.)

Example: X, a public foundation, registers low-income voters and student populations to vote in the state of Texas. X says, “The next election will set the country’s course on civil rights, health care, welfare, jobs, taxes, the arts, and the environment. Your vote counts. Register now.”

Analysis: The content of the above message, targeted to infrequent voters and phrased in a nonpartisan manner, is probably acceptable for a public foundation to deliver. Private foundations are subject to more rules on their ability to fund and host voter registration drives. For more information, see our fact sheet, Voter Registration Rules for Private Foundations.

Example: Instead, X targets only “swing counties” in one state for its get-out-the-vote efforts. X’s message to voters is “Budget cuts are reducing services provided by the state Medicaid agency. Remember to vote and let the candidates know you will not take it anymore.”

Analysis: It may appear that X is trying to target voters who agree with the foundation’s views on budget cuts. To be safer, X could have said “vote” or “your vote is important” without suggesting one should vote to support certain types of candidates. In addition, the foundation should have a nonpartisan reason for targeting voters, such as targeting communities it works with or groups underrepresented at the polls, but should not target communities because they are in “swing counties.”

Example: Foundation Y invites all Republican primary candidates for President to debate a range of topics, including trade, tax policy, environmental regulation, and health care. Each candidate is given the same number of audience tickets, and Y partners with a nonpartisan news organization to moderate. Y, when developing the questions, consults with organizations with expertise in different facets of economic policy.

Analysis: Many aspects of this event minimize the risk that it will be seen by the IRS, or the media, as a partisan activity:

• A broad range of issues is discussed.

• Y took steps to lessen the risk of a biased audience or moderator.

• Though only Republican candidates were invited, the IRS allows a 501(c)(3) organization to hold a debate or forum during the primary season limited to candidates for one political party’s nomination.

Example: After the primaries, Y invites only the Republican and Libertarian candidates for President to debate. Y asks the chair of the Republican National Committee to moderate. The moderator asks the candidates to pledge to not raise personal income taxes.

Analysis: The IRS is likely to view this event as prohibited support, or opposition for candidates or political parties. First, according to the IRS, candidate pledges indicate the organization’s support for the candidate(s) who take the pledge and opposition to those who do not. The moderator is also not neutral and not all viable candidates are invited.

Example: Six months before the election, Foundation Y presents an award to an incumbent governor, who is running for re-election, for her leadership in improving low-income children’s access to health care in the state. In inviting the governor, Y does not communicate with her campaign staff and informs the governor’s office that no fundraising or other campaign activity can occur at the awards event. In communications with the public, Y reminds attendees that it does not support, or oppose candidates for public office.

Analysis: Y has taken steps to conduct the event in a nonpartisan manner, including communicating with the governor that the event is not a campaign event and issuing disclaimers to that effect. Because the governor is not appearing in her candidate capacity, Y is not required to invite all candidates for governor to the event.

Example: The governor accepts the award from Y a week before the election, and Y’s press release publicizing the event includes the statement, “We hope our state will benefit from her continued leadership as governor.”

Analysis: The proximity of the event to the election and the statement in the press release raise the risk that this activity could be perceived as supporting the candidacy of the governor.

Example: The Z Foundation, a community foundation whose mission is to promote public health through research and policy advocacy, distributes a report on the public health benefit of passing a soda tax measure in the City of Chicago. Though a candidate for Chicago City Council is a strong proponent of the measure, Z does not publicize the candidate’s endorsement of the measure, or align its efforts with the candidate’s campaign.

Analysis: Community (and other public) foundations are permitted to support or oppose ballot measures, though they would need to track ballot measure activities to stay within their IRS lobbying limits and may need to report activities to the state depending on the type and level of activity. Also, from these facts, Z is not engaging in prohibited partisan activity such as aligning the ballot measure campaign with the candidate’s campaign.

Example: The B Foundation, a private foundation, publishes an article on its website endorsing a local ballot measure that would increase the sales tax to fund county parks, and urging the general public to vote for it. Staffers spend about 20 hours in total researching the measure and drafting the article.

Analysis: The IRS considers ballot measure work to be lobbying. Since private foundations cannot make lobbying expenditures without incurring a tax, B, and potentially its managers who knowingly agree to make the expenditure, would be taxed for the expenditures on staff time spent on this activity. Therefore, to avoid paying a tax, B may educate the public on the importance of parks, but should not refer to and reflect a view on any ballot measure.

For more information on these rules, including a more detailed explanation of how to think through these analyses and additional examples, please visit AFJ’s website at bolderadvocacy.org.