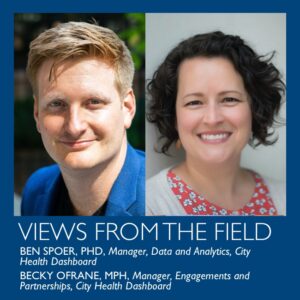 In Clifton, New Jersey, data on children in poverty, data on obesity, and data on the percent of uninsured residents revealed such pronounced disparities among neighborhoods that the city approved a satellite health office. Now, residents who previously had difficulty getting health screenings, immunizations and other necessary public services have better access.

In Waco, Texas, a nonprofit organization used the COVID Local Risk Index, a measure of city and neighborhood-level risk of COVID transmission and mortality, to pinpoint the level of COVID risk by neighborhood. Comparing this data to the city’s COVID cases added vital context to community preparation for and response to the pandemic.

Both of these cities used data from the City Health Dashboard. Launched in 2018, the Dashboard addresses the problem of data inaccessibility for cities and communities.

Just as health disparities disadvantage people of color and those of less financial means or educational attainment, so does data inaccessibility. Based largely on a combination of where they live and how easy it is to access and use data, some people can get the data they need to advocate for better, more inclusionary practices and adequate resources necessary for healthy communities. Others can’t—either because they don’t know where to find the data they need, don’t have the expertise to use it, or it doesn’t exist. Low data capacity makes it hard to get information, interpret it, and then use that information to take the steps needed to improve public health.

The City Health Dashboard recently partnered with New Jersey Health Initiatives (NJHI)—a statewide grantmaking program of the Robert Wood Johnson Foundation—to change that, by providing community organizations, their partners, and the communities they serve accessible data that can make a difference.

The City Health Dashboard provides more than 35 health-related metrics and updates them regularly. The Dashboard is especially useful because it provides data at the census tract level (neighborhood-sized geographic areas of 1,200 to 8,000 people), essentially enabling health advocates to know what’s happening in individual communities. That is crucial, because—in part due to segregation by race, ethnicity, income, and other factors—stark health differences often exist in nearby neighborhoods, even in the same small municipality.

Until recently, that was not much help to smaller communities. The Dashboard initially launched with data from the 500 largest U.S. cities, those with a population of at least 66,000. However, in April 2020, the Dashboard added data on over 250 smaller cities across the United States, including 18 in New Jersey—10 of which are in NJHI’s newly launched Small Communities Forging Hyperlocal Data Collaboratives Initiative. NJHI’s grants to organizations in those communities, all located in southern New Jersey, will equip advocates with detailed measures of the factors that shape health to guide local solutions. This pilot project will be a model for other states and for regions within New Jersey.

What sort of data does the project make accessible? In Egg Harbor City, New Jersey, the cardiovascular disease death rate is 358 per 100,000 people, compared to an average of 211 per 100,000 across all 750-plus cities on the Dashboard. The city also has a relatively high uninsurance rate among residents—23.2 percent, compared to 11 percent across other Dashboard cities. This is priceless information for community health advocates and local governments.

With granular, easy-to-use data that includes categories such as percent uninsured, childhood poverty, housing cost burden, and walkability, concerned residents can identify actionable gaps in health and its drivers, so they can target programs and policy changes and build broad coalitions to address them. NJHI will also train advocates to develop expertise to interpret data and put it into action. The City Health Dashboard welcomes these kinds of partnerships to build data capacity in communities.

In “A Study in Scarlett,” Sherlock Holmes observed, “It is a capital mistake to theorize before one has data.” But you can’t use what you don’t have. Putting more data—and the ability to use it—into more hands allows people to help their communities be places where everyone has the opportunity to live their healthiest possible lives.