The Time is Now: A Call for Philanthropic Engagement in the Implementation of the New 988 Mental Health Crisis Hotline 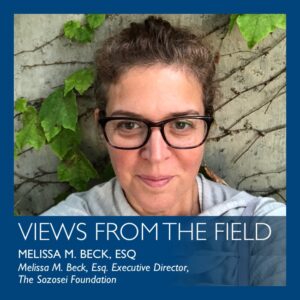 Instances of mental health crises and suicides have been trending upwards for more than a decade in the United States. This disturbing decline of American mental health has been exacerbated by COVID-19 and accompanied by a recent reevaluation of current emergency services—specifically police—in light of major events, such as the deaths of Daniel Prude in Rochester and Walter Wallace in Philadelphia. In both cases, black men with a history of mental health issues faced an ill-equipped law enforcement response when someone called 911 for help. In an attempt to provide a safer entry into care in times of crisis, Congress passed the National Suicide Hotline Designation Act of 2020. This Act establishes a three-digit number, 988, as a mental health crisis hotline nationwide.

The aim of 988 is to remove cost and logistical barriers for individuals accessing urgent support, decriminalize mental health and substance use issues, and provide a clear entry point to care for those in crises. While it is only the first of many steps needed to achieve a better mental health care system, well-resourced implementation of a 988 crisis call line at the state and local levels can jumpstart the creation of a robust and equitable crisis response system. Achieving this potential requires local call centers with well-trained personnel to provide culturally competent telehealth via answering calls or texts, appropriately staffed crisis response teams, data collection and evaluation tools, and fully developed crisis response, stabilization and quality care options in the community. The federal government has left the majority of implementation, and funding, up to the states. Currently, only a handful of states have passed any legislation on 988, which is scheduled to fully launch on July 16, 2022. Against this backdrop, local and national philanthropies have a once-in-a-lifetime opportunity to enable a robust and equitable implementation of 988.

The Sozosei Foundation has chosen to focus much of our grantmaking and convening resources toward implementing 988 through advocacy, research, communications, and support for services and care infrastructure. We have chosen to do so because we believe that an improved crisis response system—coupled with access to community-based care—are key to keeping people with mental illness out of the criminal legal system, which is the overarching goal of our work.

A robust implementation of the 988 crisis hotline across the country is far from guaranteed, however. And, depending on actions taken in the next ten months, effective implementation could even be in peril.  In short, philanthropic support on the local and national levels is needed now to leverage 988 as a catalyst for system transformation. Potential areas where local and national philanthropies could help 988 achieve its potential include:

Evaluating 988 Implementation and Crisis Response Modalities, including 911 by Supporting:

Ensuring 988 is Well-Publicized and Well-Received by Supporting:

The Sozosei Foundation believes that 988 provides a once in a lifetime philanthropic opportunity to create the mental health and crisis response services that, frankly, have never been properly resourced. We believe that this will help to decriminalize mental illness and significantly move the needle on our overarching goal of eliminating the use of jails and prisons for the diagnosis and treatment of mental illness.

The longstanding under-investment in mental health services is mirrored by the approach, to date, with the implementation of 988. Unfortunately, if 988 is not implemented well, it will be perceived as yet another broken crisis response system, particularly by vulnerable populations. Taken together, this will inevitably derail and undermine its potential. Fortunately, there are a host of local and national advocates, researchers, administrators, and legislators who are urgently working to get 988 off the ground—but they are under-resourced and spread too thin. The Sozosei Foundation is calling for local and national philanthropy to step into this space and invest in the launch of 988 as a catalyst to transform our mental health care infrastructure.

To learn more about our efforts and the efforts of our talented grantee partners, please visit us online or contact us at info@SozoseiFoundation.org.

(Special thanks to Sarah Bryer of Sarah Bryer Consulting and Barbara Ricci of Mindful Philanthropy for their input and assistance in the creation of this report.)